Dr Tilo Kunath and colleagues have developed Parkinson’s Disease resistant dopamine neurones which could improve cell therapies for the disease.

Parkinson's Disease affects around one in 350 people in the UK and is characterised by symptoms such as tremor and balance problems. Cell replacement therapy, which involves transplanting healthy cells into parts of the brain damaged by Parkinson’s, was first used in a clinical trials this year.

This latest development addresses limitations in the treatment in which, over time, transplanted tissue can acquire signs of disease from nearby cells. The team snipped out sections of DNA from human cells in the lab using advanced technology known as CRISPR. In doing so, they removed a gene linked to the formation of toxic clumps, known as Lewy bodies, which are typical of Parkinson’s brain cells.

In lab tests, the stem cells were transformed into brain cells that produce dopamine – a key brain chemical that is lost in Parkinson’s – in a dish. The cells were then treated with a chemical agent to induce Lewy bodies. Cells that had been gene-edited did not form the toxic clumps, compared with unedited cells, which developed signs of Parkinson’s.

The research team say the advance could be most beneficial to younger patients living with Parkinson’s and those with an aggressive form of the condition, but that the advance had to be tested in human trials.

“We know that Parkinson’s disease spreads from neuron-neuron, invading healthy cells. This could essentially put a shelf life on the potential of cell replacement therapy. Our exciting discovery has the potential to considerably improve these emerging treatments.”

"Cell replacement therapy represents one experimental approach to regenerative medicine for people with Parkinson's. This new research by Dr Tilo Kunath and his team at the University of Edinburgh provides another advancement in the development of this treatment. The Cure Parkinson's Trust is thrilled to be associated with this inspiring and innovative research"

The study, published online in the European Journal of Neuroscience, was funded by the UK Centre for Mammalian Synthetic Biology, the pharmaceutical company UCB Biopharma and The Cure Parkinson’s Trust. 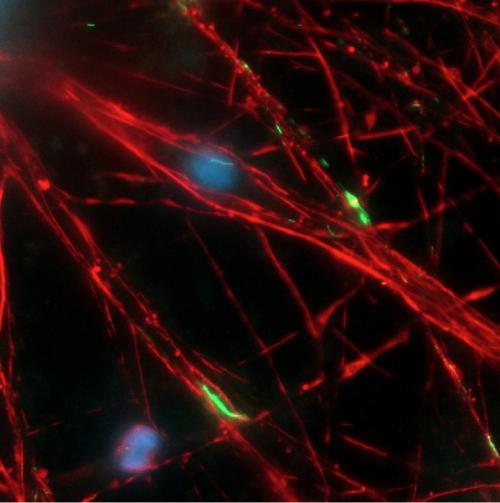